Why is My Toilet Draining Slowly?

You’re used to your toilet giving off that definitive roar when you flush it, but you know that something’s wrong when there’s only the slightest whimper as the toilet water rises then slowly drains. A slow draining toilet is also an ineffective one, often requiring two, three or even more flushes to do the job that should be handled in one, which can rather unpleasant in addition to wasting water. In short, the toilet is failing at its primary task, which is to quickly whisk away waste out of your house and into the sewage system. Yep, you’ve got a problem, and you need to figure out why your toilet is draining slowly before it gets worse. 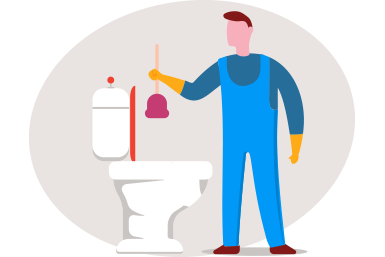 Understanding the Importance of a Quick Flush

To understand why you should care if your toilet flushes quickly, you have to understand how a toilet works. When you flush your toilet, the flushing action triggers an influx of water from the tank into the toilet bowl before traveling down the main waste line. The speed with which this water travels creates the suction required for the actual flush. The slower this water moves, the more ineffective the flush — and the larger your problem becomes.

How to Fix a Slow Draining Toilet

Fortunately, in many circumstances you may be able to fix a slow draining toilet on your own, without needing to shell out for pricey repairs. The exact remedy will vary depending on the reason that the toilet is not performing optimally:

If your slow flush doesn’t appear to be based on any of these possibilities, it’s time to call an experienced plumber who can help troubleshoot your problem and get your toilet back to normal as quickly as possible.

Already a customer? Log in to renew or transfer your service
X
Not in Houston? Please Enter Your Location We would like to provide you with the most accurate information on on our offers, including available plans and pricing. Please enter at least your zip code, but you may also enter your complete address for more detailed information.
Please wait a moment while we
verify your address.