How Does a Gas Furnace Work?

The furnace is one of the most important appliances in the home, yet many people have no idea how it works. 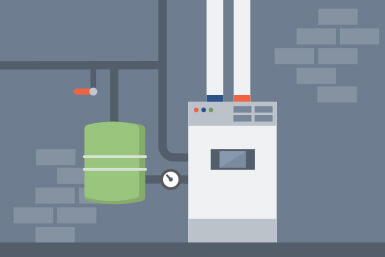 Using either natural gas or propane, the furnace is responsible for heating the cold air that travels through the home, making the house comfortable during the winter months.

A furnace works by utilizing these four central parts:

When your furnace activates, the pilot light or glow stick ignites, warming the combustion chamber as fuel and air rush in. This newfound heat warms the air found above in the heat exchanger. Once the air has reached the desired temperature, the electric motor blows the air through the ducts. The warm air flowing through the ducts pushes out the existing cold air, which is captured in the plenum, allowing the cycle to begin again and making your home nice and comfortable.

How is an electric furnace different from a gas furnace?

Many homes these days employ electric furnaces to provide their heat. While the process is very similar — cold air drawn in, warm air exhausted — there are also subtle differences.

As you might expect, the major difference between a gas and electric furnace is the heat source. Electric furnaces do not rely on combustion chambers and heat exchangers to warm the air. Instead, when the unit is operating, a series of metal coils are heated. Cold air is drawn into the unit via the circulating fan that pulls the air in. This air then travels up through three rows of heated metal coils at the top of the unit before being blown out to be recirculated again. The process is controlled by an electronic thermostat that controls how long the furnace will run and how hot the coils will become in order to achieve the desired temperature.