How Does The Power Grid Work?

Almost 100 years ago, your home’s electricity came from the big coal-burning power plant outside of town. When some guy in the plant threw a big switch, thousands of volts would flow out from the plant to the whole town. That was all the grid needed to be at that time because there weren’t too many people with things that needed electricity. So, there wasn’t much demand. 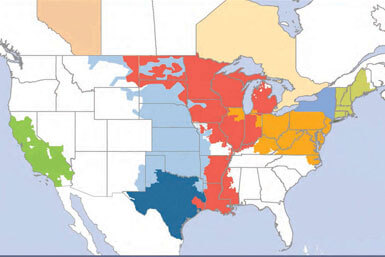 A century later and that’s all changed. Air conditioning, televisions, game consoles, computers, laundry machines, lights, refrigerators —all this stuff that uses electricity is found in practically every home. Even on a lackluster day in June, US daily electricity demand can easily exceed 12,000,000 MWH.

Consequently, takes a fairly sophisticated system to move the power from where it’s generated to where it’s needed.

The Big Switch — ISOs and RTOs

For the most part, the grid existed as an informal agreement that set up power pools between regional utilities to help meet each other’s increasing demand. But because of climbing interest rates, utilities were skittish about investing in building new generation and power pool capacity shrank. In 1978, Congress passed the Public Utility Regulatory Policies Act (PURPA) in part to create a market for non-utility independent power producers. In 1996, utilities and the Federal Energy Regulatory Commission (FERC) sought to guarantee both power reliability and equal access for generators to the transmission grid. FERC issued orders #888 and #889 which reorganized the US power grid's operation and created Independent System Operators (ISOs). ISOs operate —but do not own— power transmission lines. These include everything from high tension lines to the electrical lines on the poles in your neighborhood. ISOs typically have state or regional level control over their part of the grid and they act independently of utilities and generators to coordinate and monitor power transmissions. ISOs also operate and manage the power markets within their region. 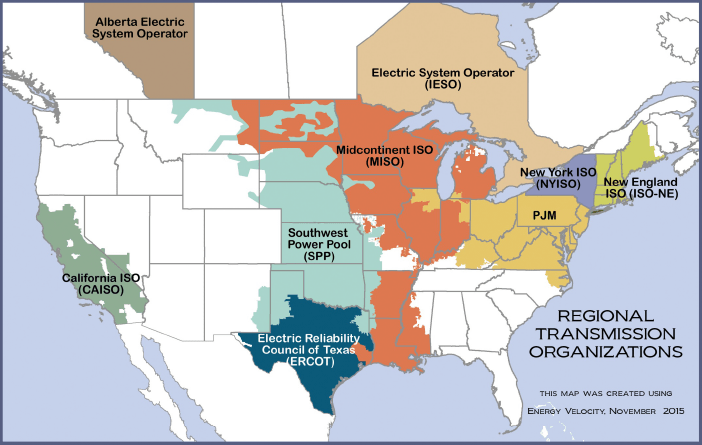 In spite of the creation of the ISOs, there were problems with insuring access to all generators, large and small, who wanted to transmit their generated electricity (called “bulk power”). In 1999, FERC issued order #2000 that created Regional Transmission Organizations (RTOs).

RTOs basically do the same job as ISOs. Conveniently enough, many ISOs became RTOs (PJM for example). But RTOs have two main differences. First, they handle vastly larger areas than most ISOs and control bulk power transmissions across state (and ISO) boundaries. The second is that RTOs are required to have power generation/utilities and transmission companies as members in their organization. This way, RTOs shoulder more responsibility for keeping the load-demand balanced and the electricity flowing.

Keeping all these organizations in line is the North American Electric Reliability Corporation (NERC). They have the legal authority to enforce reliability standards, and make sure RTO/ISO comply with those requirements such as maintaining a certain percentage of extra generation capacity. NERC’s job is to ensure that over 830,000 megawatts (MW) of power is generated and transmitted over 211,000 miles of high-voltage transmission lines every day throughout most of the North American continent.

Since utilities and transmission companies are members of ISO/RTOs, they can choose what RTO they want to join, depending on whether their interconnections physically contact two or more RTOs' territories. For example, over the past couple of years, several utilities and transmission companies in Ohio left MISO to join PJM while another group of companies in east Texas, Louisiana, and Arkansas joined MISO.

All RTOs have both day ahead markets and real-time markets. (Bulk power transmission is also planned according to Day-Ahead scheduling so power is ready to go the next day as well as a moment’s notice during the day.) Blocks of electricity are sold to cover specific hours of the day. For example, 500 MW is sold from 10 AM to 11 AM. The job of the RTO is to clear the market by arranging the offered blocks of electricity from least to most expensive. RTOs run a computerized market model that matches buyers and sellers throughout the geographic market footprint for each hour throughout the day. Generators offer to sell blocks of electricity per hour while load customers bid to buy electricity for each hour until demand for that hour is filled. About 95% of all energy transactions are scheduled in the day-ahead market. The remainder gets scheduled in the real-time market. Because real-time market prices are more volatile than the day-ahead market prices, this market runs hourly in 5-minute intervals.

Power transmission plays a deciding factor affecting price because the amount of electricity you put into the wire at one end will be somewhat less than what you get out at the other end. Even the best electrical wires possess a certain amount of electrical resistance. As wire resistance rises, the more voltage gets lost during transmission. Consequently, more power must be used to deliver the requested amount of electricity. Power line resistance occurs in two ways. First, the sheer length of the transmission line raises the line's resistance. The way to ensure that enough electricity travels from end to end is to push extremely high voltage through very thick wire cable. Transmission lines carry between 60 and 500 thousand volts (kv) compared to the 7 to 13 kv carried by wires connected to your home. So, there is more voltage loss over a 50 mile line than a 10 mile line. Fewer volts means a lower wattage of electricity is available. If you are transmitting 200 MW over a 50 mile long line, you could lose 5 to 10 MW due to the electrical resistance in the wire itself. In that case, you may need to actually transmit 210 MW so that you can actually deliver 200 MW at the other end of the line.

Sometimes when demand for electricity is extremely high, transmission companies will push enough power through a line so that it comes close to its thermal limit. When that happens, the transmission lines heat up, stretch, and begin to sag from their towers. On hot summer days, lines can sag low enough to brush against tree tops and short out, causing power failures. One of the biggest, the Great Northeastern Blackout of 2003, was touched off when hot lines brushed against trees.

Consequently, thermal limits can effect how electricity is transmitted or “dispatched” from generators to your home. Because line loss limits supply of electricity, ISOs calculate and assign penalty factors to generators to cover the price of the lost electricity.

Let’s say there are two generators supplying a 1000 MW demand (also called “load”). Each is cranking out their maximum of 500 MW, both are asking for $40/MW. Generator 1 is a local generator tied-in directly to the demand. Generator 2, however, must transmit its power 60 miles to the power distribution bus with Generator 1. That means Generator 2 is losing 12.6 MW in line loss and is really only delivering 487 MW. That means Generator 1 must crank out another 12.6 MW to make up for the loss. To figure out the cost and price, Generator 2 is assigned a penalty factor of 1.05. This increases the actual price o the electricity to $42.00/MW.

It’s obvious that the most expensive electricity is found where demand is the highest. If you have high demand on a hot day, and limited number of transmission lines, there’s a good chance for line congestion. Just like when traffic is backed up on the expressway, congestion delays and limits power transmission which increases the price to the consumer. The trick to keeping prices low lies in delivering all that electricity to a high demand area by dispatching the cheapest generators first. Sometimes, the nearest may not be the cheapest.

To see how all this works, let's look at 5 generators that have bid to service a 2,000 MW load. 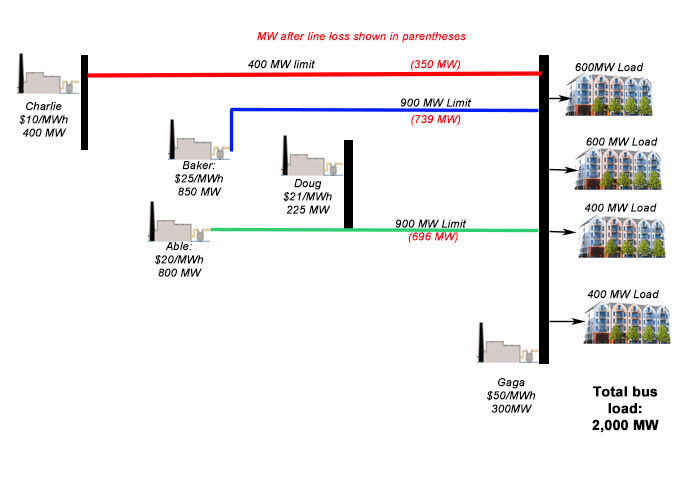 Congestion happens when the transmission of power becomes limited or constrained.

Let's say that three of the cheapest generators can meet 1700 MW of the load but the longest transmission line will be right at its 400 MW limit. Adding a fourth generator will cover the line losses and meet the 2,000 MW load but it also will max out one of the 900 MW lines and reduce the wattage that can be transmitted. Power transmission has become constrained. The only way to safely deliver the 2,000 MW then is to add the nearest (and in this case, the most expensive) generator. That raises the marginal cost of the electricity.

In the rare instance when load can’t be met and there are no other supply options, the RTO may resort to load shedding or “rolling blackouts” in order to protect generation and transmission switching installations from possible damage.

As Energy.gov puts it, "...power purchasers must buy more often from higher-cost suppliers, and the result is higher electricity costs for consumers."). If the transmission dispatcher can not find a way to allocate sufficient generation to the load, then transmission delivery to other loads could be cut to maintain the grid's reliable operation…”

Traditionally, there have been just two ways of reducing the risk of congestion, either reduce demand or increase the capacity and number of transmission lines. One developing strategy is to encourage homes and businesses to install roof top solar arrays, fuel cells, or battery storage. Also known as distributed energy resources (DER), locally producing small-scale generation reduces the amount of electricity that must be transmitted from distant generators. One transmission project in Washington state, the 80-mile long I-5 Corridor project, was cancelled after it was determined that efficiency upgrades to local power plants as well as investing in DER in the next decade would provide sufficient and flexible means to meet future growing demand.

With all its complexities, the electricity grid is so much more than just your local power plant —but the goal is still to keep the lights on for everyone.