What is a heat wave?

A heat wave is an extremely dangerous weather condition where temperatures soar well above 90° F. This high heat combines with high levels of humidity and creates a heat bubble over a certain area for an extended period of time.

How do heat waves form?

Heat waves form when high pressure air settles high in the air and causes hot air to sink down. The hot air sinking creates a bubble that acts like a seal and traps heat near the ground. This seal keeps out convection currents that form clouds and eventually rain clouds, both of which would help the area affected cool off. Instead the result is a heat wave that has both high heat and high humidity near the ground. These heat waves can last from days to weeks.

What causes a heat wave?

Heat waves are caused by a strong high pressure settling in at 10,000-25,000 ft. and refusing to move. This causes warm air to sink. The result is a dome of hot air that traps the heat near the ground and prevents cooling convection currents from forming clouds.

Myths and Facts about heat waves

How hot can a heat wave get?

The temperature of a heat wave is well over 90° F with high humidity making it feel a great deal hotter. Weather forecasters use a heat index to determine how much hotter the effect of the humidity is making the day feel. For example today in Houston it is 84.5° F, but when the humidity levels of 84% are added the day feels 98° F. Some heat records were set in Arkansas, Louisiana, Oklahoma and Texas when the heat was in excess of 120° F even before accounting for the effect of humidity.

Where do heat waves occur?

Heat waves are not just confined to the areas we usually think of as hot. Heat waves can occur anywhere that a high pressure air has created the environment to a form a heat dome. For example one of the worst heat waves occurred in Chicago in 1995 and one seasonal heat wave occurs over the Eastern Seaboard.

How do I know when to expect a heat wave?

The best way to know when to expect a heat wave is by tuning into the national weather services and knowing what their issues and warnings mean.

What is a heat advisory?

A heat advisory is a warning issued by the national weather channel when the maximum heat index temperatures could exceed 100° F or higher for at least two days without the evening air dropping below 75° F.

Is a heat wave a natural disaster?

How do heat waves affect the environment?

Heat waves affect the environment through high temperatures and low, if any, levels of rainfall. These two factors combine to make conditions ideal for droughts and wildfires. The droughts and wildfires caused by heat waves have huge influences on the surrounding vegetation and wildlife. Plants that need higher levels of water and more shade will probably die as a result of heat waves. Wildlife that struggle to keep cool or find adequate water will perish affecting the environment and their respective ecosystems.

What are the dangers of a heat wave?

Heat waves can be one of the most threatening weather phenomenons.

This is due to the fact that heat waves not only have high temperatures but also high levels of humidity. Humidity hinders the body's ability to sweat and the higher the humidity the hotter the day feels. Some of the main dangers associated with heat waves are dehydration, heat exhaustion, heatstroke and even death.The effects of heat waves are extremely dangerous for infants and the elderly because both have difficulty maintaining body temperature. Additionally, those unable to take shelter in A/C building, such as the homeless, are extremely affected by the dangers of heat waves.


How a heat wave affects humans: 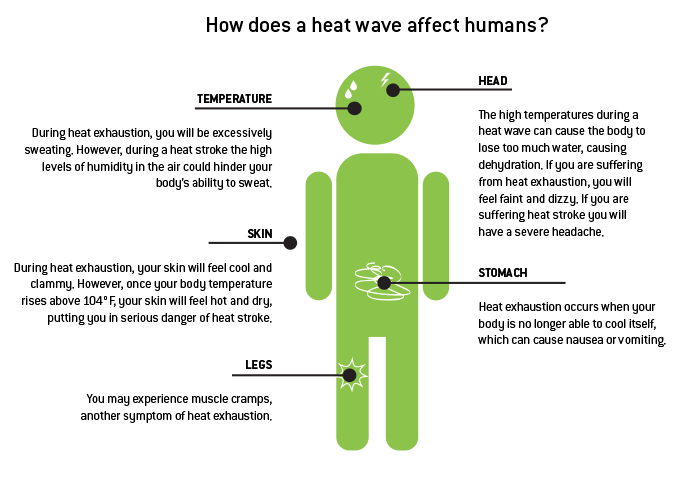 How to keep you and your pet cool during a heat wave: 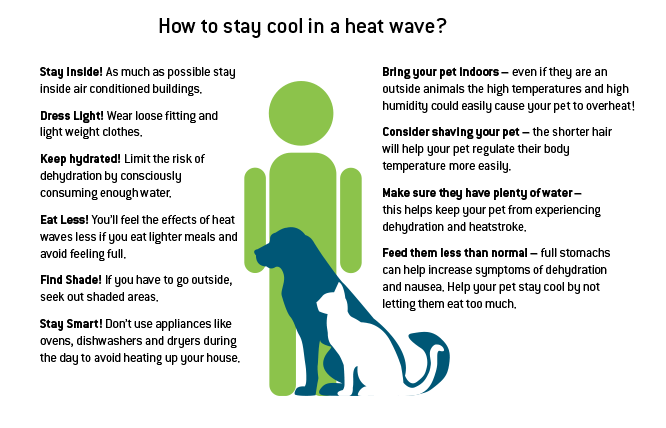 What do I do during a heat wave if I don't have air conditioning?

During a heat wave it is important that you try and keep your body temperature as close as possible to its normal temperature. Without A/C this can be tricky, but not impossible. When possible leave your home to seek out places that do have A/C. But in order to keep your home as cool as possible open your windows at night to let in cool air. In the morning close windows early to try and shut out the day's heat for as long as possible, only open them when it gets too stuffy. You should place fans strategically in your home to create cross breezes.

How do heat waves affect animals?

Animals, just like humans are affected by the high temperatures and high levels of humidity; but, unlike humans they can't step inside an air conditioned building. You may see fewer animals out around you – as they will probably seek out shaded areas to try and escape the heat.

How do heat waves affect the economy?

Higher Prices: Even short droughts caused from the excessive heat in a heatwave can decrease plant production and result in higher prices in the market.

High Electricity Bills and Power Outages: To keep cool in the high temperatures of a heatwave there is an increase in energy consumption to run air conditioners. This results in higher electricity prices and power outages.

Loss of Profits: Due to power outages businesses are unable to operate and results in a loss of profits.

Why do heat waves cause power outages?

Victor Luckerson. "How the Heat Wave's Affecting Your Wallet, Your Food and Your Holiday Weekend." Time, Time Inc., 3 July 2012, business.time.com/2012/07/03/how-the-heat-waves-affecting-your-wallet-your-food-and-your-4th-of-july-plans-2/.