What's the Difference Between a Snowstorm and a Blizzard?

Large swaths of North America are prone to severe winter weather, and sometimes blizzards are produced as a result. It’s tempting to throw the B-word around during heavy snowfall, but there’s actually a specific and technical definition. 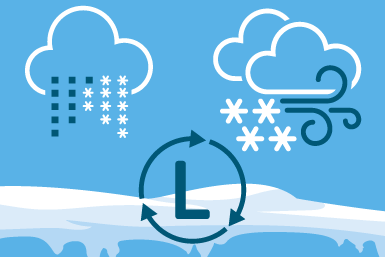 According to the National Weather Service, a blizzard is a combination of three weather events:

Interestingly, a blizzard does not technically have to involve active snowfall. If there is a large accumulation of snow on the ground already, sustained winds can blow that snow around and reduce visibility to blizzard-level conditions even when no snow is falling. This is called a “ground blizzard”.

A snowstorm, or winter storm, is generally considered less severe due to the lack of high winds and low visibility, but they can still be dangerous, especially when driving or walking on slick surfaces. Winter storms are characterized by near-freezing or below freezing temperatures and “wintery mix” precipitation, which can include snow, sleet, ice and freezing rain. Whether you’re dealing with a snow storm or a blizzard, always be prepared for the severe weather.

Where Do Blizzards Occur?

Blizzards are possible in any area where freezing temperatures and snowfall occur. In North America, blizzards are most common in the Northern Plains, the Midwest and throughout Canada. They also occur in the Northeastern United States, but because snow tends to be wetter and heavier in coastal regions, it’s less prone to being blown around in a way that severely reduces visibility.

What Is a Nor’easter?

Nor’easters are often thought of as powerful snowstorms, but a storm doesn’t have to involve any snow or even occur during winter to qualify as a nor’easter. A nor’easter is a powerful low-pressure system that originates along the Mid-Atlantic coast and features strong northeasterly winds. They’re most common between early fall and late spring, and they often do include paralyzing snowstorms.

Nor’easters generally strengthen as they move up the coast, which makes them particularly threatening to large coastal cities between Washington, D.C. and Boston.

Ordinary blizzards are bad enough, but you can definitely count yourself lucky if you’ve never had to endure a truly historic one. Here are just a few of the most dangerous and destructive blizzards in U.S. history: